Obstructive Sleep Apnea Syndrome (OSA) is characterized by complete or partial obstructions of the upper airway during sleep and it affects 2% of women and 4% of men.

Despite its prevalence, its incapacitating symptoms, its significant morbidities and the associated mortality, even intermediate or high severities are not diagnosed in 80% of cases for men, and 90% of cases for women.

Apnea is defined on the basis of airflow cessation at nose or throat level for at least 10 seconds. Hypopnea, on the other hand, is an airflow reduction of 30-50% for at least 10 seconds, capable of causing an arterial oxygen desaturation of 2-4%.
The diagnosis of Obstructive Sleep Apnea Syndrome assumes the existence of at least 5 events of apnea or hypopnea (or both), per hour of sleep. The total number of apnea and hypopnea events per hour of sleep is defined as Apnea-Hypopnea Index (AHI). An index of 5 or higher is sufficient for providing a diagnosis.

The most frequent symptoms of Obstructive Sleep Apnea Syndrome (OSA) are represented by intense snoring, excessive sleepiness during the day, wheezing during sleep and apneic episodes. Snoring can be extremely loud, disturbing partners, family members and even neighbors.

Snoring generally precedes the appearance of an excessive sleepiness during the day. Breath cessation, when witnessed by the partner, can cause worry that the breathing might not restart.

Restlessness, uncontrolled movements, excessive sweating, throat tightness, shortness of breath, esophageal reflux leading to a burning throat, need to urinate during the night, and a dry mouth are other symptoms that can occur during sleep.

The most frequent symptoms reported by patients are the sensation of tiredness and sleepiness during the day. Patients don’t feel rested when they wake up and they often struggle to get out of bed. Some patients report to feel groggy, confused and disoriented.

At first, day sleepiness occurs only when patients find themselves in boring or sedentary situations, especially in the afternoon or in the evening. Sometimes patients report difficulty in staying awake during work meetings after lunch, or when they are driving or reading. When sleepiness gets worse patients can fall asleep during a conversation, on the telephone or even while having sexual intercourse.

The most catastrophic consequence of day sleepiness is falling asleep while driving, that might lead to serious accidents.

It is essential that doctors specifically investigate the presence of drowsy driving, since its symptoms can sometimes be too mild to be spontaneously reported by the patient. 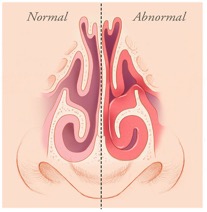 A vasomotor rhinitis with inferior turbinate hypertrophy and the consequent edema of the mucosa can compromise nasal patency and contribute to the nasal obstruction and oral breathing that are typical of this syndrome.

Pathological findings at pharyngeal level can include soft palate and uvula extension; accentuation of the arch of the palate; swelling and reddening of the tonsil pillars, of the uvula, of the soft palate, of the back of the throat; pharynx mucosa redundancy; tongue and tonsils swelling.

Children often present snoring or restless sleep, while day sleepiness is generally not marked as long as apnea doesn’t get worse. Generally, presented clinical features are snoring and shortness of breath during sleep. Other common symptoms include: inability to concentrate, a decrease of academic performance and speech development disorders. When not treated, obstructive sleep apnea syndrome in children can lead to growth retardation, hypertension and neurocognitive disorders.

Obstructive sleep apnea syndrome is caused by the narrowing or by the obstruction of the upper respiratory tract. The obstructed area can vary and can be found at different levels or sites according to the different stages of sleep.

Any alteration producing or contributing to the narrowing of the upper respiratory tract of E.N.T. competence represents a risk factor for the developing of the syndrome.

DIAGNOSIS THAT CAN DISTINGUISH SIMPLE SNORING FROM OBSTRUCTIVE SLEEP APNEA

Once a specialist examination has been carried out by the E.N.T. Doctor through a necessary video endoscopy of the nose and throat with Muller’s maneuver, the modern diagnostic approach provides for the use of home sleep recording systems (home night polysomnography)

These systems can record different combinations of clinical variables such as pulse ox, respiratory efforts, airflow in the airways, snoring intensity according to sleeping position, heart rate, electrical potential at brain level, eye movement, muscle activity and arterial oxygen saturation. These tests are conducted in the “natural environment” of the patient’s sleep, in total comfort and with extreme accuracy of results.

Patients with untreated obstructive sleep apnea present a significantly higher mortality rate than those who have received adequate treatment or those who present a primary snoring pattern without apnea.

Between 70% and 90% of patients with obstructive sleep apnea syndrome present arterial hypertension.

Cardiac arrhythmias represent another serious complication of this syndrome. Another cause of disease or death is represented by car accidents caused by sleepiness and/or impaired perception and responsiveness.

In addition to mortality and morbidity rate, patients with obstructive sleep apnea syndrome present a more marked memory impairment and a worse overall quality of life compared to patients without the syndrome.

It is often possible to correct airway defects that cause excessive night snoring and sleep apnea, without an invasive and risky surgery under general anesthesia.

In order to gain a wider space for airflow and a lower vibration of the mucosa, the snore surgeon, i.e. the ENT specialist that takes care of snore therapy, can choose among different nose and throat operative modalities.

Outpatient surgery with co2 (carbon dioxide) ultra-pulse laser requires a local anesthesia in the mucosa to be treated; this way the patient won’t feel any pain during the procedure and the surgeon will be able to operate safely and quickly.

Depending on the patients’ features (snoring intensity and sleep apnea characteristics), the thin beam of the laser can adjust the extension of the uvula, raise the soft palate and reduce the volume of the tonsils without significant bleeding, pain after surgery or hospitalization. Regarding modality and recovery time, oropharyngeal and oral laser surgery can be compared to dental treatment.

When nasal obstruction is present (blocked nose at day, worsening when lying) diodes laser is used to decongest the turbinate mucosa and restore excellent airflow through the nose. Inferior turbinate laser therapy for vasomotor rhinitis only takes a few minutes, is painless, doesn’t require any nasal tampon and its results are quick and lasting.

The surgeon inserts a specially designed small hand-piece in the palate, in the uvular prolapse, at the base of the tongue or in the hypertrophic turbinate (according to the defect to be corrected)

The thermal energy produced by radio-frequencies causes the mucosa to stiffen and decrease in volume, leaving its surface untouched. Two results, as it’s easy to understand, can be achieved this way: snoring improvement due to a reduced vibration during the passage of air, and a reduction of sleep apnea due to wider airways. 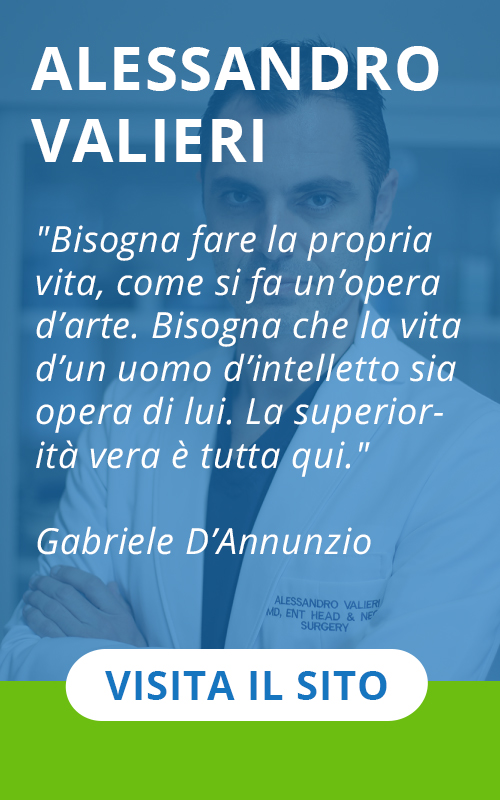